Online subscription for the edition in Norwegian is 69 NOK / for recurring months. Our English offspring is the biannual broadsheet Modern Times Review – The European Documentary Magazine.

Our predecessor, the weekly newspaper “Orientering” was founded in februar 1953. Since August 1975 it changed its name to NY TID – as a continuation of the previous Orientering. Between 2006–2010 the newspaper changed format into a magazine. Later this was changed back to a newspaper tabloid format.
In 2015 NY TID was renewed as a classical critical (intellectual) monthly newspaper – with Truls Lie as editor-in-chief. He has previously been editor-in-chief/publisher in the weekly Morgenbladet (1993–2003) and monthly Le Monde diplomatique (2003–2013). 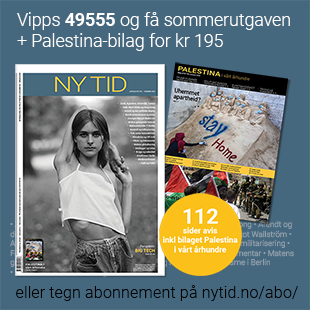